3D Device Prints In and On Paper

We recently shared our take on why 2D is like 3D printing. While we conceded that the devices themselves are different, we made the argument that the process of printing in two or three dimensions is essentially the same:

File is created >> File is sent to print device >>

We also made the point that like 2D printing, the 3D printing market will eventually service customers at home (via desktop printers), online (via web-to-print) and at retail (via 3D print shops.) The retail channel has yet to be developed and we think this represents a huge opportunity for traditional printers, print franchises, big box office supply stores, and shipping companies like FedEx and UPS.

One of the objections raised by some in these markets is that the substrates and consumables used in 3D are too dissimilar from those used in traditional printing.

END_OF_DOCUMENT_TOKEN_TO_BE_REPLACED

I recently read an article on TechCrunch by Jon Evans entitled, “3D Printers Are Not Like 2D Printers.” While I would agree with the title (obviously the two devices don’t serve the same purpose), I don’t agree with argument Jon makes for why 3D printing is not like 2D printing. 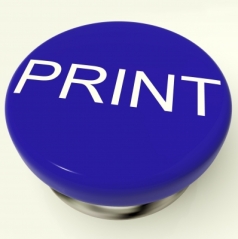 His primary argument is that 3D printers make “stuff,” while 2D printers disseminate information. I’d counter that argument by pointing out that packaging, boxes and other forms of dimensional print not only provide information, but serve as containers – stuff that holds other stuff. Jon’s point is that “our relationship to stuff is thoroughly, extremely, fundamentally different from our relationship to information.” I would agree noting that with some amusement that kids sometimes play with the box more than the toy because they perceive the box as more interesting stuff.

More importantly to me however is the implied assertion that 3d printed “stuff” doesn’t or can’t disseminate information. Consider for example, the 3D printed, customizable Android figurines currently for sale on Cubify.com. Other than to promote the brand, what purpose do they serve, and with the obvious exception of an extra dimension, how are they really any different than a poster or wall graphic of a customized Android figure?

END_OF_DOCUMENT_TOKEN_TO_BE_REPLACED

Circle Us on G+